Pam Kirkwood sent this email today, January 15, 2020...
Many of you may have known Gus Ghiselli BHS Class of 1947. We are sad to report that Gus recently passed after having suffered a stroke. Gus was retired from the movie industry and was a dedicated Burbank High Bulldog Alumni and participant of the Senior Bulldog Association.
He was such a sweet and loving man and he will be missed by so very many who knew and loved him. Funeral arrangements are set for Saturday, January 25, 2020 at 10:00AM at Valhalla (Valhalla Memorial Park Cemetery is located at 10621 Victory Boulevard in North Hollywood, Los Angeles, California and Burbank, California.)

Funeral arrangements are set for Saturday, January 25, 2020 at 10:00AM at Valhalla (Valhalla Memorial Park Cemetery is located at 10621 Victory Boulevard in North Hollywood, Los Angeles, California and Burbank, California. 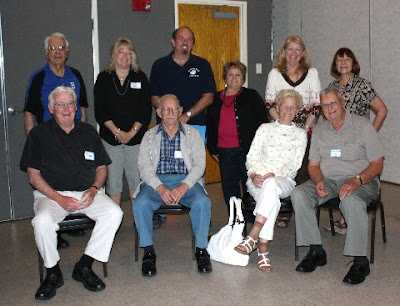 Lupe Covarrubias
My condolences to the family

Pat Bushman
My condolences to the family. May he rest in peace.

Cathy Coyle
Gus was such a soft spoken, kind man. He would love to attend the Sr. Bulldog luncheons . Gus was one of the original BHS Class of ‘47, who started the Sr Bulldogs Foundation. He would make all the announcements & walk around to each table (with Nadine Magee on his arm), to have each attendee announce their name & grad year. He was a true gentleman. He will be deeply missed.

Pam Kirkwood
Yes, such a gentle and kind man. He always had a smile and a hug...

Carrie Diaz-Lathouwers
My condolences to all his family and friends. RIP Gus

Gloria Moya
My most sincere condolences 🙏🏻💙

Harold Maxham
God needed another Bulldog for his team.

A GUS MEMORY...
8/12/19 - Korean War Remembrances by Gus Ghiselli (from a 2005 Burbank High Senior Bulldogs Newsletter)
Gus Ghiselli (BHS Class of '47) wrote: "I was training in Yamagatu, Japan getting ready to go to Korea. My good friend Bob Wilkie was already in Korea, in the southern part. I wrote and told him that if I could get in touch with him when I got there, I would. On Dec 22, 1951 the 40th Division was alerted for Korean duty to relieve the 24th Infantry Division. Our boats got to Inchon, Korea on Jan 11th, 1952. It was below freezing weather. (Is that any way to treat California kids?) We boarded railroad boxcars and headed straight north to the Iron Triangle. Our artillery guns were to help support the 2nd ROK Division. I tried several times to try to reach Wilkie. Going through our switchboard, then transferring the call a little farther south to the next switchboard, etc. But we would always run out of juke before reaching each other. When I was being sent home, I went south to a replacement camp. I was looking at the ship's manifest list to spot my name, when this arm came over my shoulder and pushed my hand down. I turned to see who in the heck it could be. It was my pal, Bob Wilke! We were listed on the same ship to leave Korea and go to Sasebo, Japan. What a great time we had visiting and catching up. Unfortunately, we were not on the same ship that brought us home. However, we were on our way home and that was the important thing. We were later best man at each other's wedding."
http://wesclark.com/burbank/burbankers_remember.html