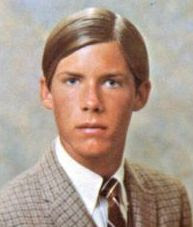 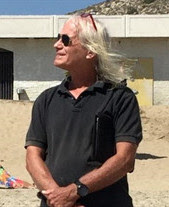 Bill was the oldest of four children growing up in Burbank: Gary (now Shane) graduated from Burbank High in 1972, Glen graduated in 1974 and sister Kim (graduation date unknown),

OBITUARY
William Kerry Parrish, Jr., affectionately known as Bill, was born November 12, 1952 in Glendale, California to parents William and Madeline Parrish. He was raised in Burbank, California where he developed a love for surfing and played football at the local high school.

On December 25, 1983, he married the love of his life, Rosa. After moving around to different cities and states leaving his unique impression wherever he went, he settled in Birmingham, Alabama where he spent out his last years.

On February 27, 2019, Bill went to be with the Lord. He was surrounded by the love of his family and friends.

Bill was the simplest, most complicated man. He was always ten feet tall, and yet his humbleness drew people from all walks of life into his circle. Although his talents in life were nothing short of genius, it was the simplicity of them that awed and turned heads wherever he went. To all the people and work in his life that he touched, he handled with the same class, love, and affection that he did with those he held most dearly. Even the earth, plants, and trees appreciated him, and thrived under his care, when he touched them.

He leaves those to cherish in his memories: his wife of 35 years, Rosa; sons, Carlos, William III, Caleb, and Joshua; daughter, Michaela; devoted daughters-in-law, Sophia and Amanda; grandchildren, Giovanni, Gina, Genevieve, Giana, GianCarlo, Maya, Linda, and Lorrainne; and a host of other relatives and friends.

Mike Signorelli
I knew Bill, we grew up together along with his two brothers and sister Kim and Gary ( can't remember the youngest brothers name). Bill like most of us was a bit lost as a teenager, he was caught up with a religious group that swept him away! He virtually disappeared the last year of high school! I believe that, for the most part he was never seen again! I'm sorry to hear of his passing I'm also sorry to hear that in his obituary there was no mention of his brothers or sister or even the name of the high school that he played football in, which of course was Burbank High! Bill as I remember him as a good guy pretty soft-spoken but he had his moments. I also must say that Bill had many friends he was well-liked! I'm sorry to hear of this, it's very sad! I often wondered where he was and what happened to him, may he rest in peace in our Lord's arms. See again sometime!🙏🙏🙏

Pat Bushman
So sorry to hear this. My prayers and condolences to Bill's family and friends. May he rest in peace.

Barbara Coryell O'Malley
I remember Bill most from grade school at Jefferson. Sweet repose to him.

Kathleen Wyatt Richardson
This saddens me...I guess it's our time 😪 and this will happen more and more. RIP Bill.

Gary Bric
My next store neighbor growing up on Groton. Good Man.

Louanne Peterson
So sad...I remember Bill well since the class seating chart had us together always....Parrish and Peterson! He always made me laugh and was such a gentle soul...
Posted by Cathy Palmer at 7:10 AM