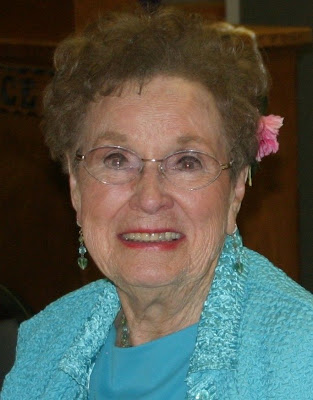 Genevieve Sultenfuss, local 'role model,' dies at 104
Pioneer was the first woman to lead the Glendale Chamber of Commerce.

Longtime Glendale resident Genevieve Sultenfuss, who achieved several firsts for women in realty and community leadership, died on Sunday. She was 104.

Her legacy included serving as the first female president of both the Glendale Assn. of Realtors and later the Glendale Chamber of Commerce.

"Genevieve was a kind soul, she was a wonderful role model, and a beautiful spirit," said Councilwoman Paula Devine during Tuesday's City Council meeting. "She touched a lot of lives in her 104 years. She will not be forgotten."

Sultenfuss was born on Aug. 12, 1910, in Colorado. She moved with her family to Burbank in 1923 and graduated from Burbank High School.

She worked as a legal secretary for 10 years before moving onto a career selling homes in Glendale.

In 1955, she opened her own realty firm, Glendale Properties Inc., and worked in real estate for 30 years before retiring.

She was president of the Realtor association in 1968 and recalled in a 2005 interview with the News-Press what it was like to be in that kind of role while she was surrounded predominantly by men.

"I just worked and worked and when people asked me to do something, I didn't know how to say 'no,'" Sultenfuss said. "I took it very slowly at first and didn't want to try and dictate to all these men what to do."

She was also named Realtor of the Year by the association in 1972.

Rick Barnes, the association's current president, said he first met Sultenfuss in 1976 and referred to her as a "stateswoman" for her decades of community involvement.

Sultenfuss also won the Woman of Achievement award in 1977, bestowed by the News-Press.

She was named president of the chamber of commerce that year and was a past president of Soroptomist International of Glendale, a volunteer organization for business and professional women, which she joined in 1961 and was a member of for 50 years.

A big party in 2010 honoring Sultenfuss' 100th birthday was held at the local Elk's Lodge with more than 250 close friends and family in attendance.

The City Council adjourned in her memory on Tuesday.

As a past chair of the city's Commission on the Status of Women, Devine said she once named Sultenfuss as the chair's Jewel in honor of her life's work.

During the council meeting, Devine fondly recalled another milestone for women Sultenfuss accomplished — being the first female member of the all-male Verdugo Club.

"She felt that there would be some concern if she let people know, so every time she went to a meeting, she would take a male guest so that everyone would think he was the member and she was the guest," Devine said. "That was her sense of humor."

Funeral arrangements are still pending and Sultenfuss' family members are encouraging donations be made in her honor to Soroptomist International of Glendale.

GENEVIEVE IS AN HONORED GUEST
http://bhsclass67.blogspot.com/2010/09/special-guests-at-bhs-senior-luncheon.html
Posted by BHS Blog at 11:17 AM No comments:

Our deepest condolences to the Royle family... 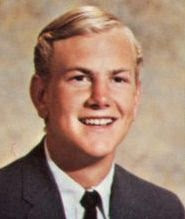 FROM FACEBOOK TODAY
Jean Depp Ponek wrote, "My Uncle Scott Royle passed away today, November 20, 2014 from a heart attack. This was a picture I found, my mom will be emailing me a better picture after everything has settled down. Scott graduated in in 1969 from Burbank High. He was 64. Scott coached numerous Softball teams in Burbank I believe all of them were named the Roadrunners! Go Roadrunners!!!!" 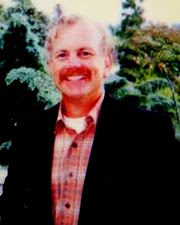 Please scroll down for updates 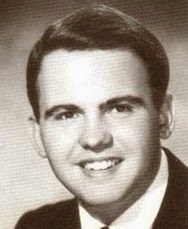 We don't know much about Bill's passing but did find this...

http://www.vietvet.org/wcbio.htm
WILLIAM (BILL) CAUGHEY
It'll be forty-eight years on the planet in June, so perhaps it's time for an inventory...

Things i'm not so proud of: selling cars for fifteen years, flunking out of college three times, being a chronic procrastinator, and never learning how to juggle.

Things i'm proud of: the three and a half years i spent in the Air Force walkin' dogs, being married to the same woman since 1970, having two teenage sons who will become good men, going back to college for the fourth time, becoming a teacher, and having the nerve to revisit those demons and write "War Story."

Things i plan to do: graduate with a degree in history in June 1996; teach till i die; teach the grandkids to body surf; learn to juggle; get regular haircuts; live in Redlands, California, for the rest of my life; and write something else i'll be proud of.

I'm building a Web page based on "War Story" and the K-9 experience. I need pictures of Angeles City - Clark AB circa 1969, poems, essays, photos about dog handlers and the Vietnam era...full credit to everyone and everything will be returned unharmed.

My late husband, William D. Caughey, passed on October 23, 2005. He was residing in Redlands, California at the time.

Both of us were in the class of 1966 BHS. We never dated in high school, but he sat behind me, alphabetical order, my name being Canzoneri, his Caughey.

We saw each other when he was home on leave from the Air Force in 1968 (Vietnam War). We communicated by letters and tapes for the next two years, and were married on May 30, 1970. Had he lived, we would have been married 46 years, this May 2016. I still have his tapes and letters from that very special time.

To this date, he is sorely missed.
Jolene (Canzoneri) Caughey 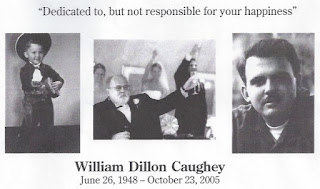 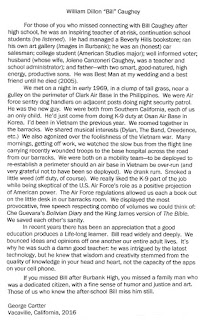