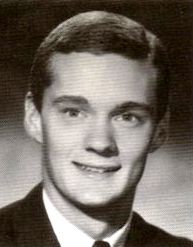 Sad News: Jim Davis passed away on June 10th. I don’t know if you heard, or were aware of this.

His younger brother Harold (Hal) class of 70, informed me and others of the loss.

Please keep the Davis family in your thoughts and prayers.

"He had a massive heart attack and died in his Santa Monica gallery. He will be greatly missed."
- Tony Milton (Facebook)

From Jim's website
http://historia-antiques.com/
James Caswell comes to the world of antiques with a unique perspective and preparation. His involvement with antiques, tribal and folk art was a natural outgrowth of his interests as an artist. He worked for over 20 years as a studio artist in a variety of media. As an artist and craftsman he attempted to synthesize traditional concepts of form and decoration into a modernist sensibility. Shamanism, spirituality and tribal world-view were frequent points of reference and inspiration. Ethnology and art history were integral to his aesthetic.

During that period he exhibited in galleries and museums in North America, Europe and Asia. In 1983 he received a National Endowment for the Arts Individual Artist’s Fellowship. From 1983 to 1985 he was an artist in residence at Sevres, the French National Porcelain Works, where several of his unique vases were put into production.

All of his life James Caswell has been an avid collector. In the early 1980’s his interest turned to Mexican folk art, which led to his opening Historia in 1987.

Jim in Historia by Bruno Dayan 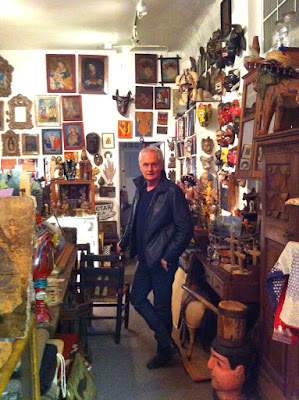 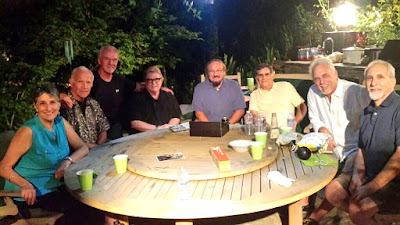 The 50th Reunion is a go:  A weekend of activities culminates in the Big Bash on Sunday, October 16, 2016.  (Remember:  “Ten-sixteen-sixteen”)  We’ll keep you posted on the details as we get closer.

Some of the Committee: (starting 2nd from left:) Jennifer (Dale) Schatz, Kris (Sorensen) Blum, Christy (Seekins) Evans.  On far left is Carol Matthews, on a short knee-healing break from hiking the Pacific Crest Trail (in borrowed clothes for the day)