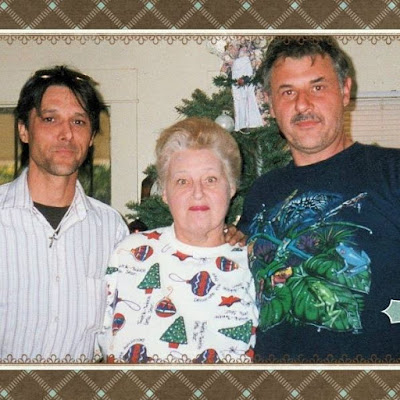 Facebook photo of Csaba on left and Attila Juhasz with their mother, Catherine.

Heartbreaking for a mother to loose both her sons within 2 years. Please keep Catherine and her family in your thoughts and prayers.

Csaba Thomas Juhasz, 58, born on January 26, 1958 in Toronto, Canada, passed away April 11, 2016. He resided in Banning, California, at the time of his passing. Arrangements are under the direction of Forest Lawn Hollywood Hills, Los Angeles, California. 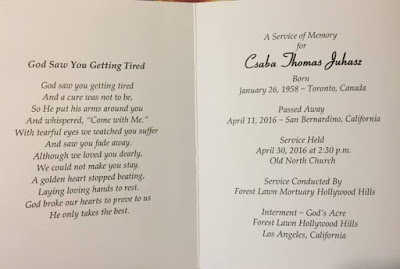 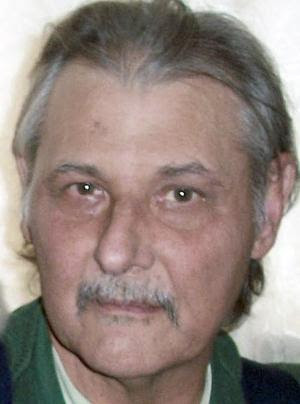 Attila L. Juhasz passed away April 12, 2014 in Loma Linda at the VA hospital after a serious illness.

He was born in Toronto, Canada on Feb. 28,1955 but he grew up in Burbank. He lived in Beaumont since 1997. He was a great man, a loving husband and father, and also a Vietnam veteran. He battled his illness in the last 14 years and he mostly was a stay-at-home dad.

He was very much involved in his children’s education and in their school life and activities. He had a great heart and he always tried to help out the less fortunate. He will be greatly missed by his wife, Eszter, of 16 years; his three children AJ, Attila and Elizabeth; his mother, Catherine; and his brother Csaba. He will have full military honors during gravesite services on Friday, May 2, 2014 at 2 p.m. at Riverside National Cemetery. 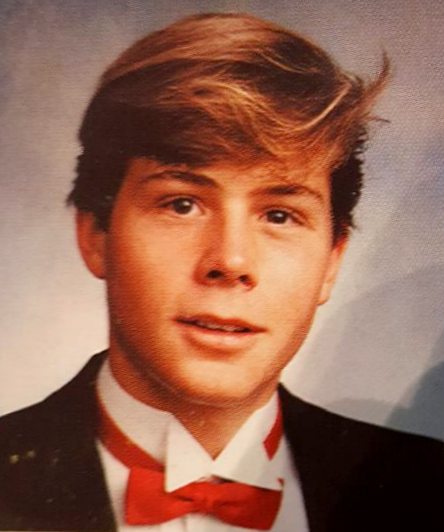 Stephen Andrew Woody, age 46, of Prescott, Arizona passed away on Jan. 27, 2016 at his home surrounded by his loving wife, Pastor Al and his wife Julie. Stephen was born on May 25, 1969 in Glendale, California to Stephen and Connie Woody.

He is survived by his wife Sandra Kay Woody; his loving father Stephen Woody; a sister Tamara Woody-Ortega; paternal grandmother Billie Jean Woody; maternal grandfather Arvie Kyle; a niece Rene Ortega; and numerous other family members. He was preceded in death by his mother Connie Woody and paternal grandfather Floyd Earl Woody.
Steve had a huge love for baseball and played as a young child and into college. Steve graduated from Burbank High School in California. Over the years, he has lived in California, Florida and Arizona. He was a true blue Dodgers fan, L.A. Lakers fan and an Oakland Raiders fan.

He spent most of his life as a mechanic and ended his final days as a production manager at ABC Carstar Body and Frame in Prescott, Arizona. He attended Calvary Daysprings Chapel where he served as an usher and volunteered to help wherever his "MUSCLES" were needed!

He will be remembered for his quick wit, love of animals, outdoors and mostly his huge heart. He will dearly be missed by many and his favorite color was BLUE.

A memorial service will be at 1 p.m. on Saturday, Feb. 6, 2016 at Calvary Chapel Daysprings Church, 2180 Gulfstream in Prescott, AZ 86301. Relatives and friends are welcome to attend the service and reception following service. In lieu of flowers donations may be made to Northland Cares.ORG. Entrusted into the care of Abcfunerals in Prescott Valley. 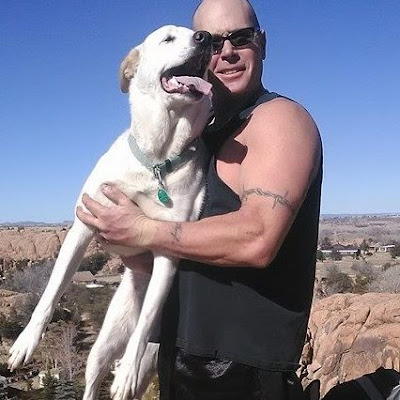 Photo from Facebook
Posted by BHS Blog at 4:37 PM No comments: 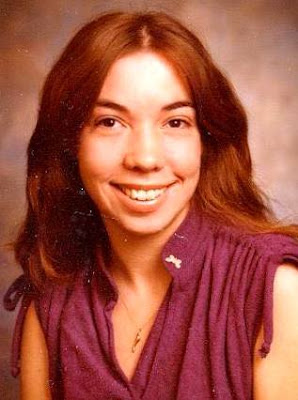 Jodean Ardizzone Myers posted this photo in Facebook and wrote:

If I had a flower for every time you made me smile and laugh, I'd have a garden to walk in forever.

And from Find A Grave, we found this:
Pamela is survived by her loving husband of 25 years, Scott; her mother, Dorothy and sisters, Dana and Jodean (Jim); her loving fur babies Reagan Jean and Shelby Anne Kelcee and many family and friends. Thank you to the Petrolock family. Services were held May 9, 2015 at Halley Olsen Murphy Funerals and Cremations, 44831 N. Cedar Ave., Lancaster. Donations can be made in Pamela's name to The Seeing Eye Dog Foundation.

To Our Loved One
Life has happiness, joy and sorrow
But never promises about tomorrow
your smile, laugh and loving touch
A happiness you gave no one can touch

Life is unfair when it takes anyone
These words you will hear flowing
from every tongue
We all sit and ask ourselves why
But deep inside we know even the
good must die.

It is Hard to let go of the ones we love
We must remember they are with God above
You have now taken your place with the best
Our loving God and Eternal rest. 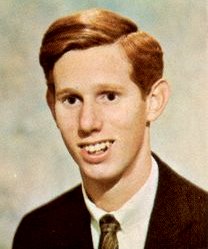 Arrangements are under the direction of Brusie Funeral Home, 342-5642.
Source 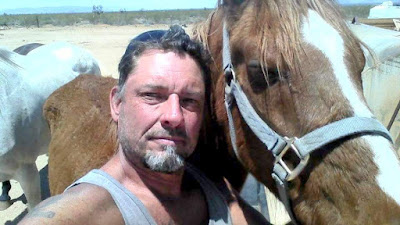 Sad news posted from Brenda Rossie-soto on Facebook...
"ERIK RISS very special person 4/10/2016. Sunday he had a motor cycle accident and past away."
Posted by BHS Blog at 3:58 PM No comments: 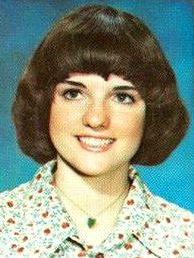 Terri Hill Perry, BHS ‘74, passed away unexpectedly at her home in Marysville, Washington on November 30, 2015, three days before her 60th birthday, after many years of health issues from numerous illnesses.

Therese Louise Hill was born December 3, 1955 at Kaiser-Sunset Hospital, in the Hollywood/Los Feliz area of Los Angeles to John “Jack” Hill and Eleanore Hill of Burbank. Terri was the fifth of the six Hill kids. The family lived at 931 E. Verdugo Ave. in Burbank. Jack Hill was a local architect. Terri attended Joaquin Miller Elementary School for kindergarten, then attended St. Robert Bellarmine Elementary for 1st through 8th grades. She was at John Muir Junior High for 9th grade, and then Burbank High where she graduated in 1974. Terri was a talented artist, and was always very artistic in every area throughout her life.

Terri is survived by her 16 year old son, Damon Perry, of Gold Bar, Washington; her siblings, Maureen Hill Franklin (Jerry) of Prescott, AZ (Bellarmine-Jefferson ‘61); Cathy Hill Bangert (Rob) of Oak Harbor, WA (Bellarmine-Jefferson ‘63); Mike Hill (Bonnie) of Reno, NV; Christine Hill-Hill (Bob) of Olympia, WA (BHS ‘71); and Patrick Hill of Hathaway Pines, CA (BHS ‘76). She also leaves seven nieces, one nephew, four grand-nieces, one grand-nephew, and her former husband, Dave Banks of Burbank. Terri was predeceased by her husband, Rick Perry, who passed away in 2005 due to cancer, her mother, Eleanore in 1991, and her father, Jack in 1994. 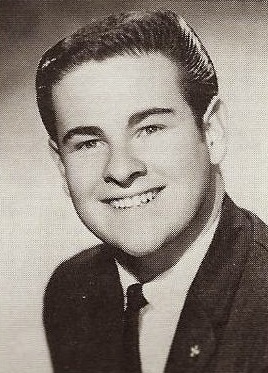 Diane Babko wrote today in Facebook, "Terry Pittsford, class of 1963, who brought joy, laughter, music and friendship to many of us, passed away on Easter Sunday. John McWilliams (class of 1962) wrote these thoughts about Terry."

The Music Man
The voice,
the wry grin
Filling the stage
With relish
Unbridled enthusiasm

Jackie Gleason, Jonathan Winters,
And a host of others
Impersonated with not so subtle grins

The occasionally almost reluctant survivor....
Then returns the artful comedian