Check it out... you may see some familiar faces...

www.mbmcdaniel.com
Posted by BHS Blog at 9:44 PM No comments:

The City Of Burbank's Veteran Committee is collecting items to be mailed to our Warriors in Afghanistan.

Our goal is to send 400 packages for the Holidays. 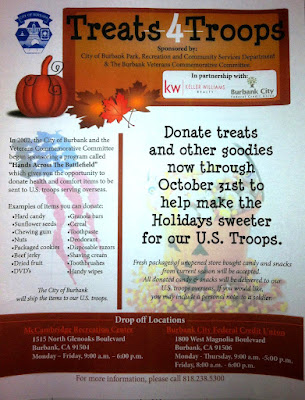 We send our deepest condolences to the families and friends of the following BHS alumni...

We are including the following people who has passed away recently in the Septempber newsletter:

Muriel Collins Dahl W ’42, passed away in July 2012. No additional information is available.

Leon McFarland ’42, passed away on August 24th 2012 in Briar, WA. No additional information is available.

Freadus “Buzz” Seal S ’40, died on July 23 of congestive heart failure. He has married twice (both deceased) and had one daughter. His last four years were spent with a loving companion, Georgia Newton also a S’40 graduate. He and a friend had a TV Sales & Repair Store in Burbank. He served in the US Navy in the South Pacific as an electrician.

Jimmy Woods S ’54, passed away in Las Vegas, NV where he had lived since 1958. He played football, basketball and track and was a member of the "Drifters of Burbank" Car Club.
Posted by BHS Blog at 5:45 PM No comments:

As we continue to look at the costs to produce the Burbank Sr. Bulldogs newsletter, one option we are entertaining is developing a website. Many people have access to the internet, and if we put the newsletter online it will reduce the number of newsletters that we send out.

In order to do this we are desperately looking for people that will assist us in the development of the website. I know there are many classmates that have this expertise and hope that you will contact us and volunteer a little of your time. 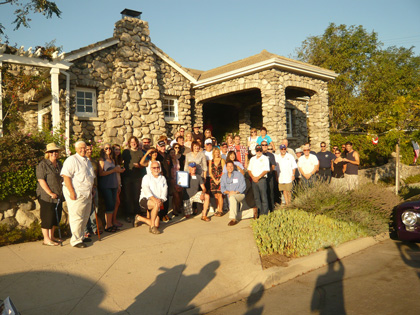 Preserve Burbank is a grass roots movement of Burbank residents and business owners encouraging, promoting and supporting the City of Burbank's programs which preserve our community's architectural history and restore the design integrity of our community's built heritage.
Burbank Central Library


Information about how to designate a home as a historic landmark is now just a click away.

The site features links to applications to begin the historic designation process for individual homes, or to sign up to possibly receive a property tax deduction through the Mills Act, which provides tax abatements for historic properties.

City Council members recently approved guidelines for establishing historic districts — an application for which will be on the website once the paperwork is finalized, Rehner said.

There is also a link to take a visual tour around the city that features homes that have been designated as historic, are in the designation process, or have the potential to be considered historically significant.

“One of the things we often hear from residents in Burbank — and some longtime residents, actually — [is that] they feel there is nothing left in Burbank to preserve,” Rehner said. “If people look at what Burbank still has left, they’d see a lot. There are still properties worth preserving.”

The site also outlines the top-10 myths about historical preservation, including a big one: that a homeowner cannot change a house in any way after it’s listed as a landmark.

Interior changes and renovations to exterior parts of a house that can’t be seen from the street are actually permitted, mirroring historic preservation rules in other cities, such as Glendale.

On the homepage, there is a link to a section dedicated to the Burbank Central Library, located at Glenoaks Boulevard and Olive Avenue. Completed in 1963, the library features a unique architectural design.

“It’s a rare example of Mid-Century Modernist New Formalism,” Rehner said, adding that the building has not been listed as historically significant, but Preserve Burbank members have been talking to city officials about making it a landmark.

Rehner said the organization, which started about two years ago, has grown its membership to more than 400 and the website is already generating new members.

Just three homes in Burbank have received historic designations, but eight property owners have submitted applications to be considered for the landmark process.

"The Class of 1972 just celebrated our 40th reunion . . . here is a photo taken in the new BHS cafeteria by our wonderful classmate and amazing photographer, Carol Bliss-Sheetz. We enjoyed seeing our alma mater . . . even with all the changes. Special thanks to Roberta Grande Reynolds (also in our class) for making this happen!!!"

"We are so happy that Roberta Grande Reynolds is still so active in Burbank (she's on the board!!!) . . . we loved having Dr. Jan Britz and former coaches David Kemp and Frank Kallem at the reunion. Also, we're so happy that Bob Smallenburg was on hand to share such fun memories!!!" 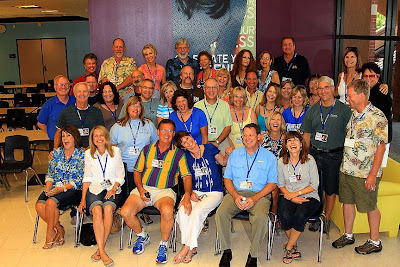